This article is taken from my book – British Military Swords 1786-1912.  An Illustrated Price Guide for Collectors.  To order a copy please go to: https://www.antiqueswordsonline.com/category/books 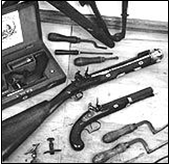 HENRY NOCK AND THE BEGINNINGS OF WILKINSON SWORD

Wilkinson Sword set the standards for contemporary firearms. From its origins in the eighteenth century, Wilkinson Sword always represented the highest possible standards and most advanced technology of the sword maker’s craft.

The company was founded by Henry Nock in the year 1772. Although accounts of his background are sketchy, it is thought that Henry Nock learnt his craft as a gun maker in Birmingham and came to London to seek his fortune. He made his name quickly, with a series of brilliant innovations that transformed the design and performance of sporting and military firearms, such as the ‘screwless’ lock.

When the British Government placed an order for 10,000 flintlock muskets and bayonets – then by far the largest contract ever – Wilkinson Sword became universally known as the supreme gun maker of the age.

In 1804, James Nock was appointed Gun Maker to George III, thus beginning a relationship between Wilkinson Sword and the British monarchy, which has lasted to the present day. On his death, that same year, Nock passed on the business to his apprentice and son-in-law, James Wilkinson, who had worked for the last ten years as Nock’s foreman and general manager. *

James Wilkinson continued making guns for the Board of Ordnance as well as the leading gentry of the day as the Wilkinson Sword record books reveal – but he did not possess the innovative spirit of his forebear. Indeed it was his son Henry who took the company to even greater heights, extending the tradition of excellence into sword manufacture. 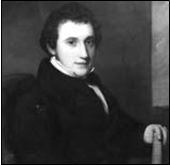 Henry Wilkinson benefited from a good education, excelling in the sciences, and counted among his friends the discoverer of electricity, Michael Faraday. His interest in weaponry made him an international authority on arms. Among the books he published were Engines of War (1841), and Observations on Swords, published in 1848, which ran into 21 editions.

Soon after taking the business over from his father, in 1824, Henry Wilkinson made a shrewd move – relocating the company next door to the Board of Ordnance in Pall Mall. Like Henry Nock, Henry Wilkinson worked very closely with the Master General of the Ordnance.  He  carried out much experimental work with guns, and began developing many new patents.

Wilkinson knew that the rival swords of the day lacked the strength required for battle, with many of his military customers dissatisfied with their weapons. Working closely with his customers, he started to experiment with forging blades and performing tests in his bayonet workshops. 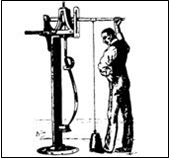 As a result of Henry Nock’s experimentation, a sword testing machine was developed in 1844.  It is  still used in the Wilkinson sword manufacturing process nearly 160 years later. The machine called the Eprouvette, tested swords and bayonets, exceeding the stresses and strains expected in battle. If the sword passed his rigorous test, it was given a proof mark and certificate, guaranteeing that he or his manager John Latham, had personally tested the weapon. Each sword was individually numbered and recorded so that owners, and their weapons, could be traced.

As well as becoming Queen Victoria’s appointed Sword and Gun Maker, Henry Wilkinson’s list of customers grew rapidly to include HRH the Prince of Wales, the King of Naples, the King of Prussia, and numerous members of the House of Lords.

By 1858, Henry’s ill-health prevented him from being so involved in the company, and his manager, John Latham took on the business. A sword and fencing expert himself, he took Henry Wilkinson’s vision forward. In this time, the company made a very determined move in the direction of sword manufacturing, as the government was expanding and modernising its own firearms factory, resulting in the reduction of many contracts.

The crucial turning point came while the British Army were fighting in Sudan in 1885. It emerged that many bayonet swords were bending and breaking, thus resulting in the unnecessary loss of many lives.  The scandal outraged the public and the Board of Ordnance took immediate action, leading to Wilkinson Sword being given its largest order ever, to manufacture 150,000 bayonets.

After many years in the City of London, this large order prompted the company to starting looking for a larger factory, which it finally managed in 1899 when Wilkinson Sword moved to Oakley Street, Chelsea. 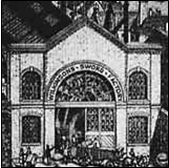 INTO THE 20TH CENTURY

By the turn of the century, they began to diversify into other products, notably their natural move into razor production, producing the ‘Pall Mall’ safety razor in 1898. This was followed by the manufacturing of typewriters, bicycles, motorcycles, motor cars and a wide range of sporting and hunting equipment – the common factor being that each was the best quality and design at that time. 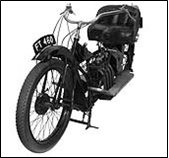 The company moved to larger premises in Acton in 1903. During the first World War, this factory was engaged in producing over two million bayonets. Later, during the second World War, Wilkinson Sword was given contracts to manufacture more than 10,000 bayonets.

Following the centuries-old tradition of using swords to honour wartime glories, Wilkinson Sword was required to make many presentation swords during the war. Among the most famous is the Stalingrad Sword. When the Russians defeated the Germans at Stalingrad – now Volgograd, in 1943, the British Prime Minister Winston Churchill decided to reward the victory and celebrate the Anglo-Russian alliance with the presentation of a sword.

The forging of the steel blade was primarily the work of Tom Beasley – an 83 year old, leaving his sickbed to make the sword. He came from a family of sword-makers dating back over 250 years. Tom, a father of 23, had been making swords for Wilkinson Sword since he was 8 years old, and had also forged swords for Kings and Queens across the world.

Churchill presented the sword to Stalin in Tehran, in 1943. A copy of the sword, which was on display throughout the country at the time, now rests in the Wilkinson Sword Museum. 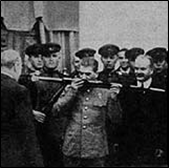 For over 200 years, Wilkinson Sword has continued to manufacture swords of the highest quality, ensuring that the legacy of Nock and Henry Wilkinson lives on. Not all swords produced are of military pattern and Wilkinson Sword specialise in the design and manufacture of unique swords for commercial presentation or to commemorate special events.

The sword makers craft is best expressed in the motto which appears on the Wilkinson Sword Armorial Bearings granted to the company in its bicentennial year: “Semper Qualitas Suprema” – Always the Finest Quality. 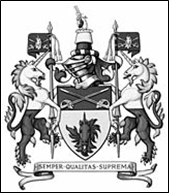 THE MAKING OF A WILKINSON SWORD IN THE 20TH CENTURY The  blades were hand-forged from special high-carbon Sheffield billets smelted to their own specifications.  Billets were hot-rolled on machinery that dated back to the 1850’s.  Wilkinson Sword blades were ground on spectacular five-foot carborundum wheels to the correct section and profile – this process could take several hours to complete. Careful heat treatment (either oil or water) hardened and tempered the blade. It was then tested for fighting-quality strength and flexibility on machines invented by Henry Wilkinson some 150 years ago. One of them bent the blade up to 30 degrees either side of vertical: each blade had to return to perfect straightness – or be rejected.

NOTE:  A sword’s “point of percussion” is where the maximum force can be delivered. Each Wilkinson Sword was subjected to a stringent strike test precisely at that point. Only those that passed were permitted to carry the Wilkinson Sword name and proof mark. 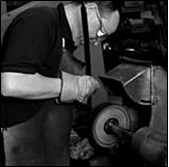 The forged and heat-treated blade was hand polished to a mirror-finish, using progressively finer grades of polishing wheels. Steel or brass hilt components received the same painstaking attention to remove any small blemishes from casting processes prior to plating. 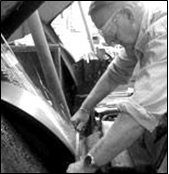 Patterns, legends and insignia were acid etched onto the blade using traditional wax and screen processes by men with an average of 27 years experience. Wilkinson Sword pattern books dated back over 150 years.  The proof mark, inset in brass or acid etched onto the blade, symbolised the strength of the armourer and proclaimed the authenticity of every Wilkinson Sword. Each of the Wilkinson blacksmiths  “signed” his work with his own marking stamped onto the tang – the extension of the blade which locks into the grip. 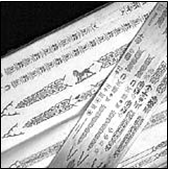 Hilts were assembled to the closest tolerances from a wide variety of hand-polished components, often gold-plated and always conformed precisely to the original designs. For presentation or limited editions they were also be embellished with precious metals, enamels or gemstones.  The grip of a Wilkinson Sword was a work of art in its own right.

For many of the models, sharkskin, rayskin or leather, was applied to a carved wooden core and then bound with gold or silver-plated copper wire. Others boasted a hand-carved grip in ebony or other rare hardwoods. 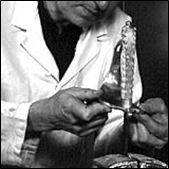 It took several hours to hand stitch each rawhide scabbard, using natural leathers and yarns – and longer still to complete the curing process.

Scabbard mounts were frequently hand-made, as for the Navy Flag Rank swords and Household Cavalry mounts.

Finally, the scabbard was dyed and polished before being fitted with solid brass mounts, carrying rings and its protective shoe. 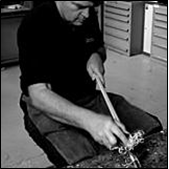 The Wilkinson Sword factory, located in West London, was an illustration of where traditional handcrafting techniques were being combined with the latest technology to produce optimum levels of performance and quality.

Each individual sword and scabbard passed through a number of stages of manufacture within the factory. Each craftsman applied their individual skill to an aspect of the sword or scabbard before passing it on to the next operation. This method of work involved a high degree of trust, with each craftsman depending on the work of his colleagues to create the perfect fit and finish.

In the fifteen strong workshop there was over 150 years worth of experience in sword making including forging, etching, polishing, finishing and final assembly of the swords, scabbards and components. Each craftsman specialised in a particular process, having learnt skills passed down from previous generations, going back two hundred years.

There were a number of father and son teams employed in the workshop and one staff member was the third generation of his family to have worked for Wilkinson Sword.

NOTE:  Here are some fascinating short films made in the 1950/60’s and showing Wilkinson Sword makers manufacturing regulation pattern swords for the British Army – some of the characters shown are in my article – Click Here  and Here

This is another fine short film detailing the manufacture and presentation of a sword to General Dwight D Eisenhower in 1945.  See it Here.

Not to be reproduced without prior agreement.